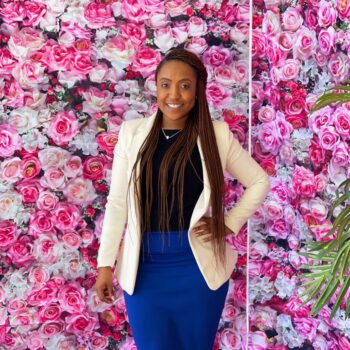 Sophia Migabo, an IBTCI Analyst embedded with USAID/LAC’s Office of Caribbean Affairs (CAR), is not afraid to take on new challenges. In April 2022, Sophia sat down with Program Associate Elene Kurtanidze and International Program and Proposal Support Intern Kidsena “Kidi” Tafesse to share her experience working on the USAID/LAC CAR team. Excerpts from their interview with Sophia below provide a glimpse on what attracted her to the position and her challenges and triumphs in her first year supporting the USAID/LAC CAR team.

Elene: What attracted you to work with IBTCI on our USAID/LAC contract originally?

Sophia: Thank you so much, it’s a great opportunity. What attracted me to IBTCI was the diversity and the professionalism. When I visited the website, it highlighted a lot of great spaces of diversity as well as IBTCI having a branch or an office in the Democratic Republic of the Congo (DRC), which I am originally from. I’ll just say IBTCI is also a great place for people who are interested in international development.

Kidi: So obviously, it’s a mutual relationship, you grow, you contribute. So how have you grown professionally, since you began working with the USAID/LAC CAR team?

Sophia:  Professionally, I definitely have grown in my ability to better host meetings. Again, I’ve stepped into a different role in the past few weeks where I came from taking notes to now hosting calls with the mission and coordinating with other agencies. I joined some of the Toastmasters classes that USAID provides to help improve my delivery and speech.

Kidi:  So would you say you’ve gotten more confident as you’ve gone through it?

Elene: What were the most intriguing aspects of the job that you hoped would help you grow as a professional?

Sophia:  So the specific countries that I support are the Dominican Republic, Haiti, Jamaica, and Eastern and Southern Caribbean countries. I had to step up to learn how to write briefers, work with classified documents, and understand how to engage different embassies and other government agencies and many more. It has definitely helped me step up with my professional knowledge or skills.

Elene: So how has your job changed since you first joined over a year ago?

Sophia:  Wow. Elene a lot. As I continue with my day-to-day tasks, I’m also what they call an “acting desk officer” for Jamaica for this summer. One of the most recent tasks I just completed was when the Prime Minister of Jamaica visited the U.S. He met with Vice President Kamala Harris, Secretary Blinken and Treasury. He then requested a meeting with USAID. In addition to drafting the briefer, I had to have contact communication with different inter-agencies, our mission, and many others. I’ll say my growth has been learning how to thrive in a challenging moment. It was more about understanding the processes and once you get it you’re good! If there has to be another high-level visit, I’ll know exactly what to do.

Elene: And if the team didn’t think you were capable of doing it they wouldn’t have asked.

Sophia:  I agree. I have great USAID colleagues and they are really supportive.

Elene: Yeah. So the last question from me is what is your favorite part about working for your team, other than your supervisor?

Sophia: Yeah. They are very nice people and a great team. They care about where one is and are intentional about you. They don’t treat me differently because I’m a contractor. They are inclusive and a lot of times ask for my opinion.

Also, last November I was one the recipients that received the PAC meritorious Honor Award for “extraordinary efforts to responding under unprecedented ways of a highly complex compounding crisis in Haiti during the summer of 2021…Assuring that USAID was best positioned to assist the people of Haiti while maintaining excellence and supporting the rest of the Caribbean region.”

Haiti was going through a lot which pulled on heavy pull on those that cover that portfolio. During that time Haiti’s former President Moise was assassinated in his house, leaving his wife shot. And thankfully, his children weren’t home. So it was a lot of work. A lot of meetings because USAID was also assisting the country due to another earthquake that took place a few months before.

Kidi: Yes, okay. I was about to say, you seem like you rise to the occasion a lot though. So what’s been your proudest moment since you joined IBTCI to support USAID/LAC initiatives. What would you say was the biggest moment?

Sophia: It was when I was one of the recipients of the PAC meritorious Honor Award. Just stepping up to the occasion, like you said, I’m constantly asking if there’s anything my team needs, and striving to constantly learn.

Kidi: So how have you liked working within an ecosystem with other organizations? How have you navigated that external environment?

Sophia:  One of the ways that happens, is to work with your counterparts. For now I’m interacting a lot with my Jamaica desk officer counterpart from the State Department. We compare a lot of notes to make sure we are saying the same thing so that all information is coherent in our briefers and any deliverables.

Kidi: And what advice would you give to someone who wants to work on a USAID institutional support contract?

Sophia: Definitely be a problem solver. Take initiative and ask lots of questions. Also, reading documents ahead of meetings to familiarize yourself with different subjects and topics is super helpful. It’s a fast-paced work environment so you have got to think strategically. Finally, I’ll say learn to understand USAID’s relationship with different inter agencies like the State Department, the National Security Council/White House and the host governments they work in.

Back to News
Menu